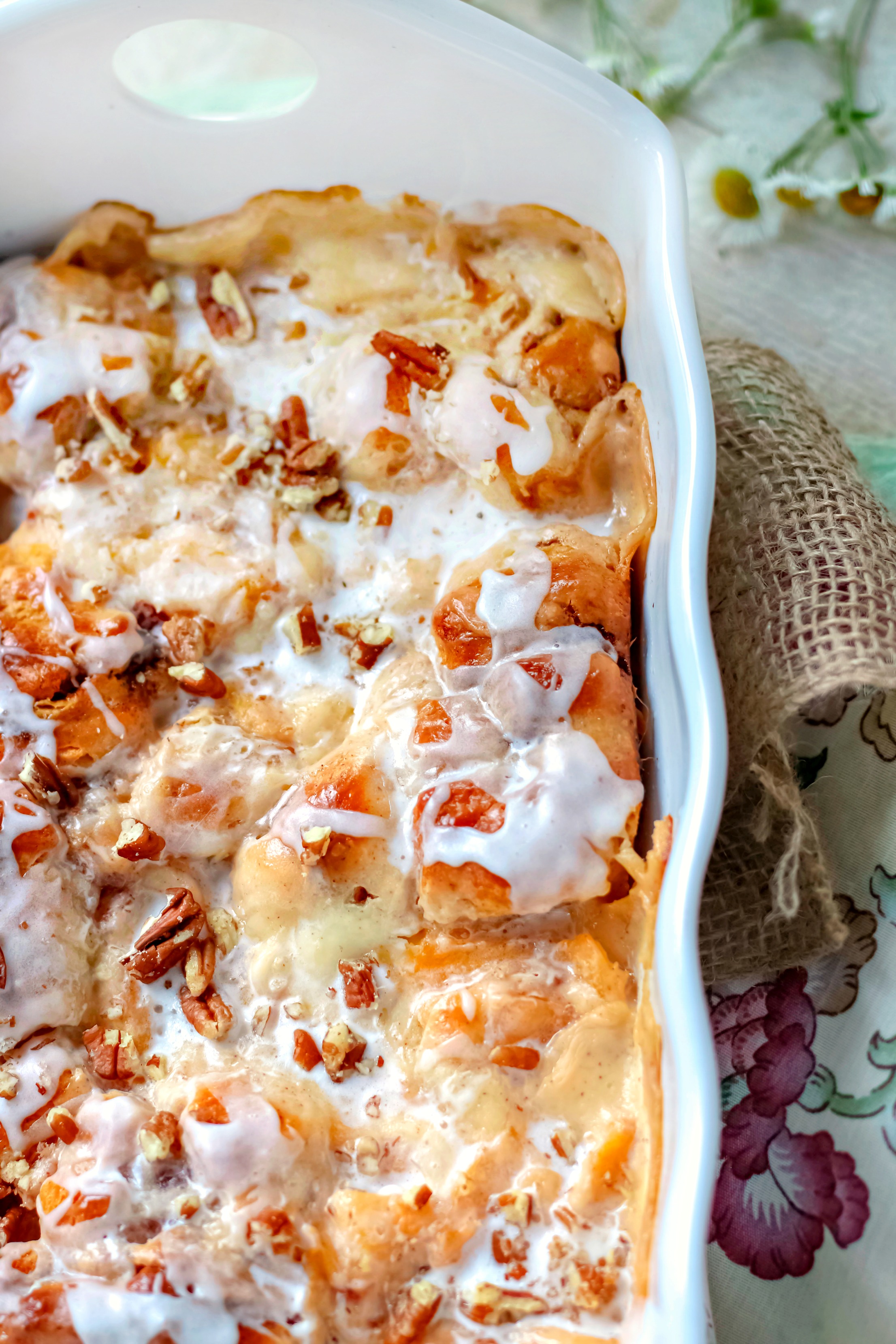 The peaches, the cream cheese, the cinnamon rolls, good grief this was good!  Whether you eat this hot or cold your going to love the flavor and the texture of this delicious breakfast casserole. The recipe has a total of 4 ingredients. An eight ounce package of cream cheese, 3 cups of frozen sliced peaches thawed, 1/2 cup powdered sugar and one can of Grands refrigerated cinnamon rolls with icing. 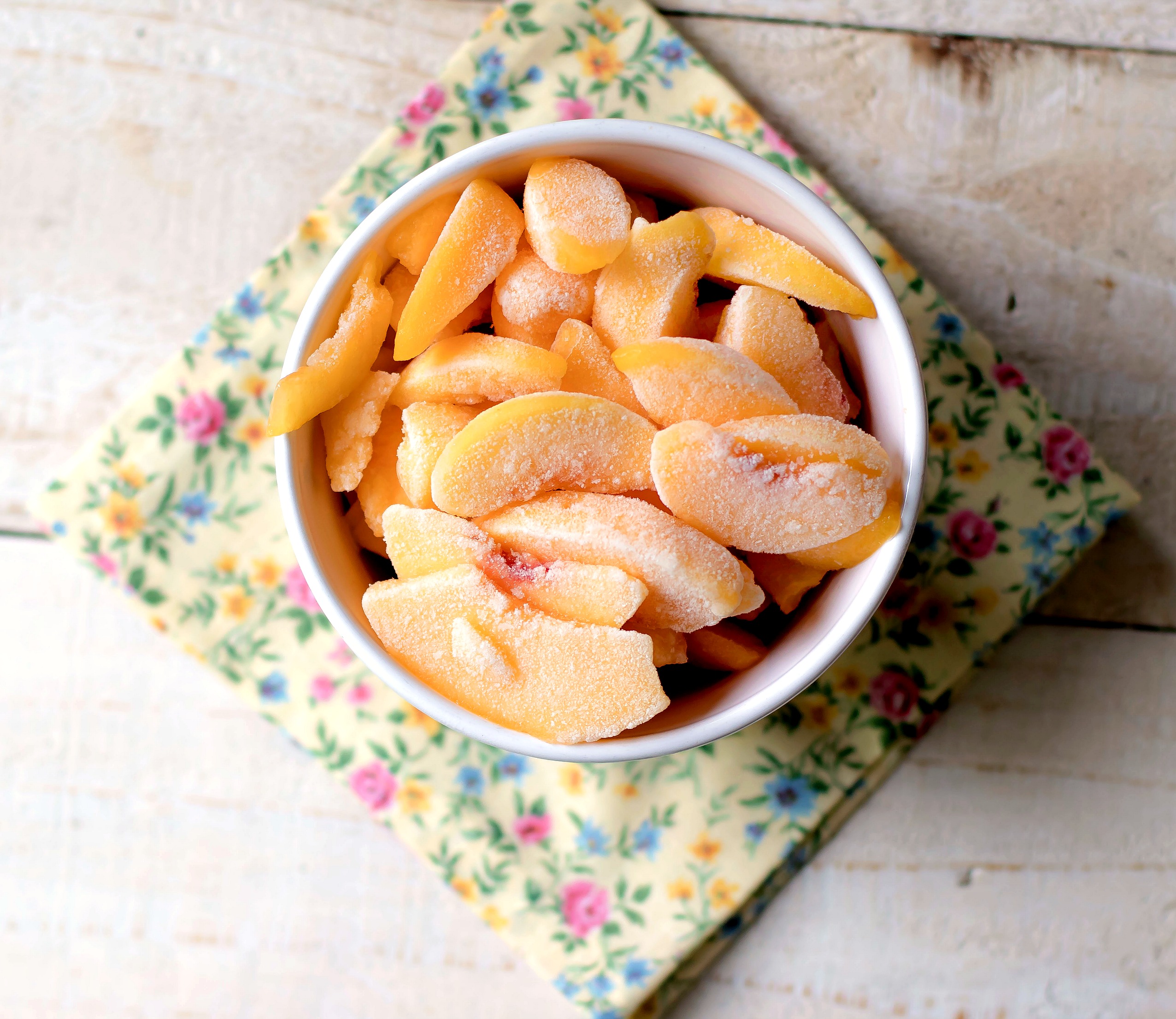 Because this recipes uses frozen peach slices you can make and enjoy it all year round.  Do you have peaches you froze yourself in the freeze?  This would be a great way to use them. Measure out the three cups needed for the recipe. Laying them out in a single layer on a plate or cookie sheet will help them thaw faster. After they’re thawed cut the slices into one inch pieces. I used my kitchen shears for this, or you could just use a paring knife. 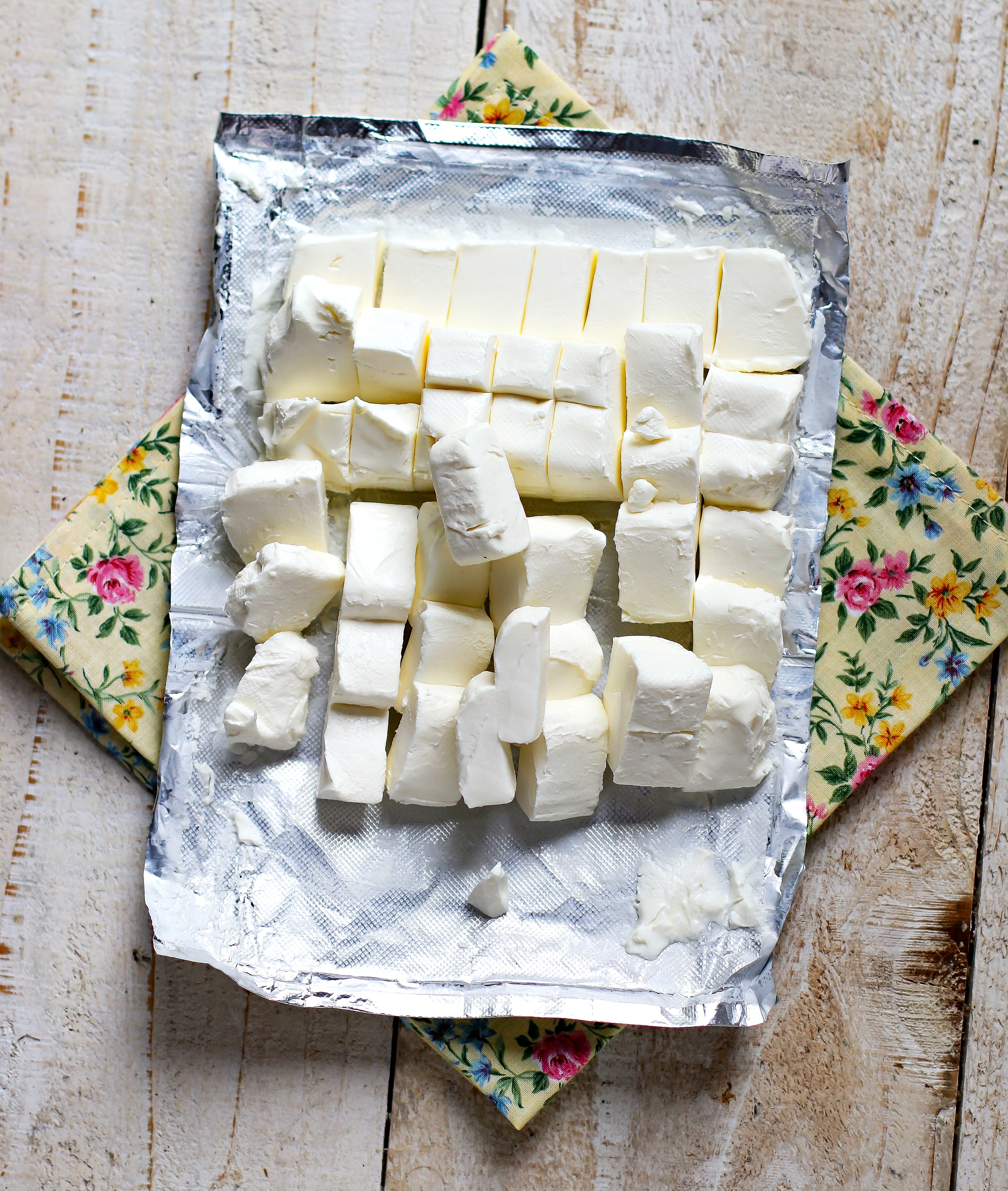 Take an eight ounce block of cream cheese, cut it into cubes and either let it come to room temperature until it softens and add the powdered sugar to it and stir or… 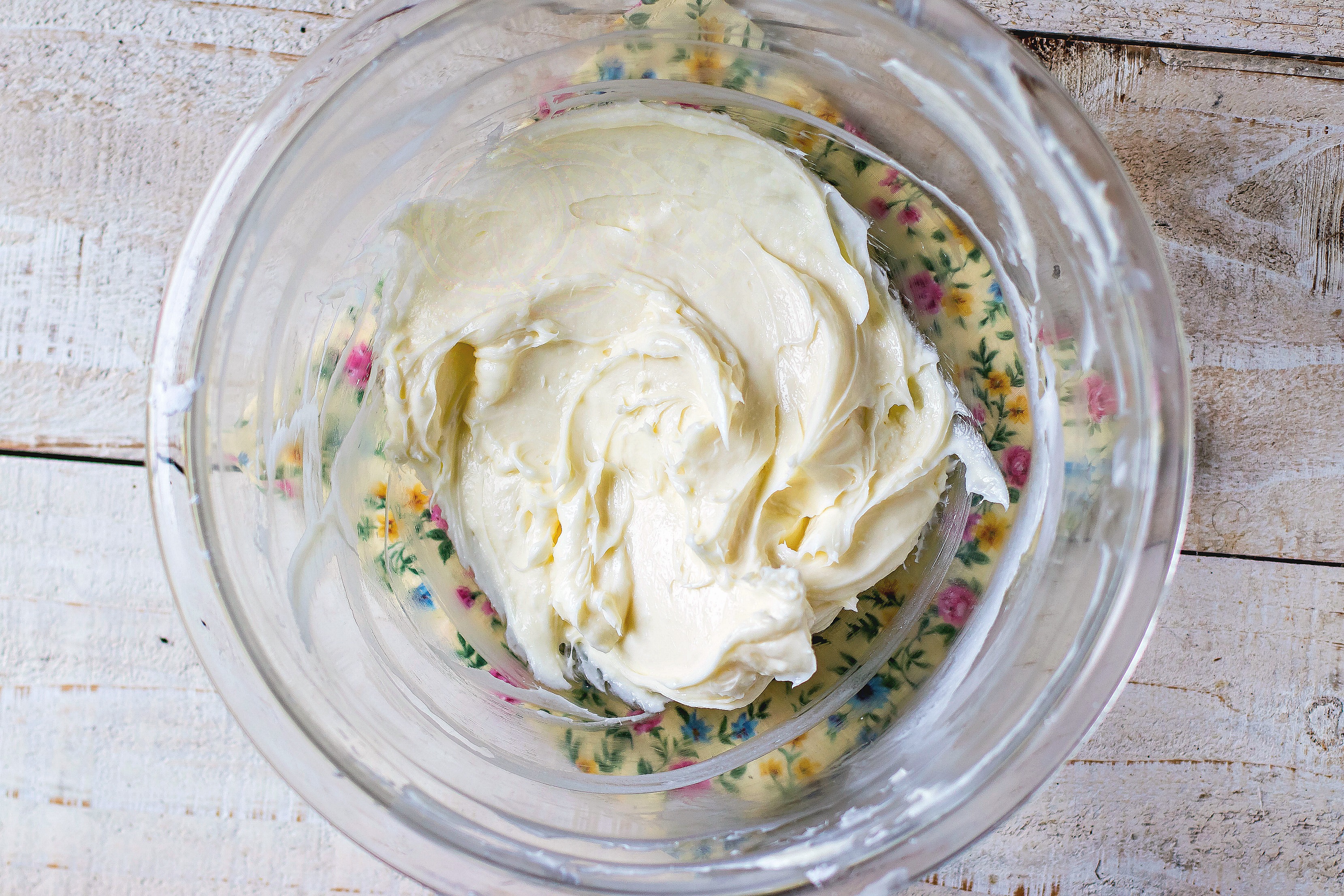 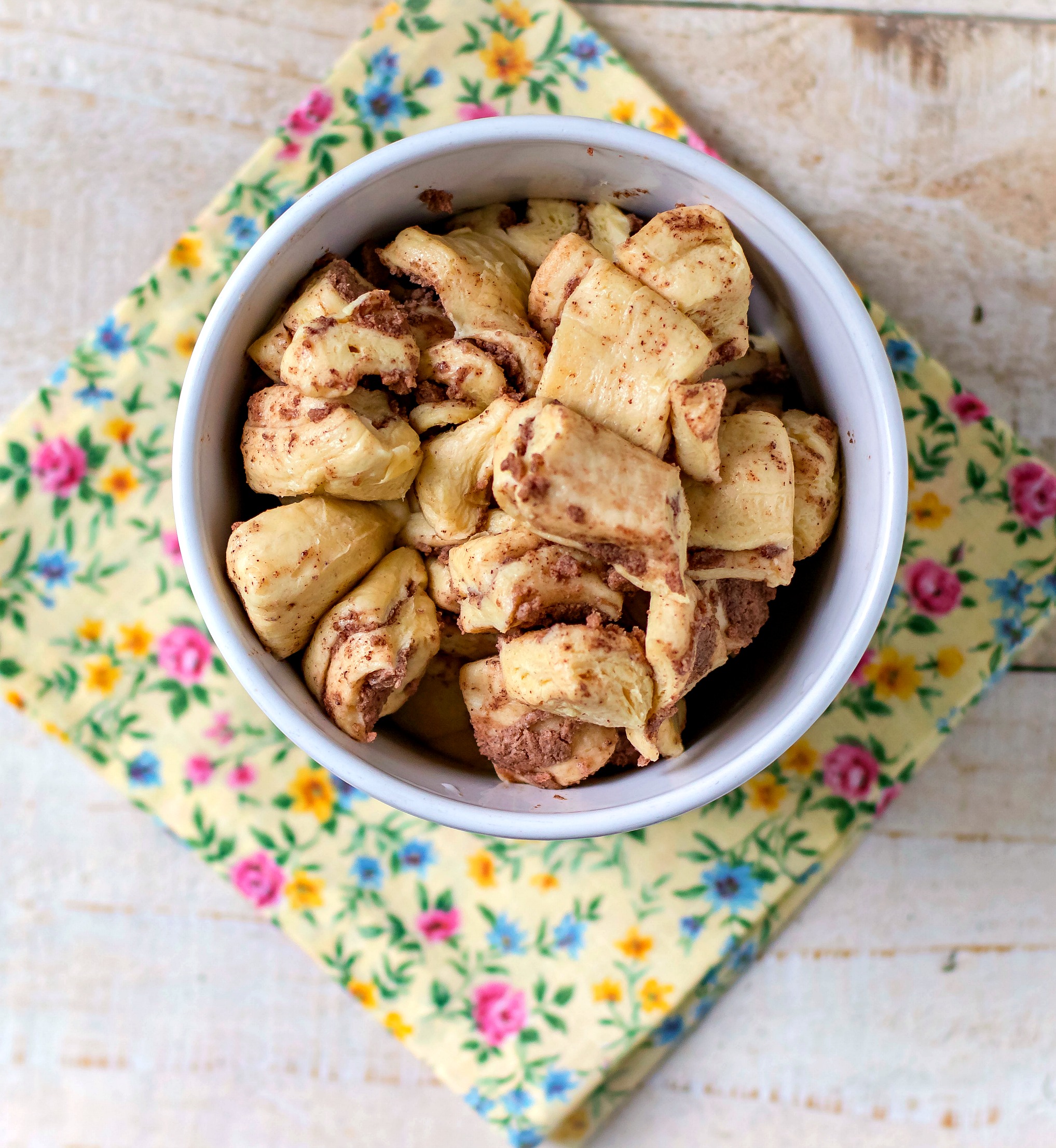 After you open up the canister of refrigerated cinnamon rolls, lay the icing aside, your going to use it.  Your next step is to cut each roll into six pieces.  I used my kitchen shears and cut each roll in half, then I cut each half into three pieces. 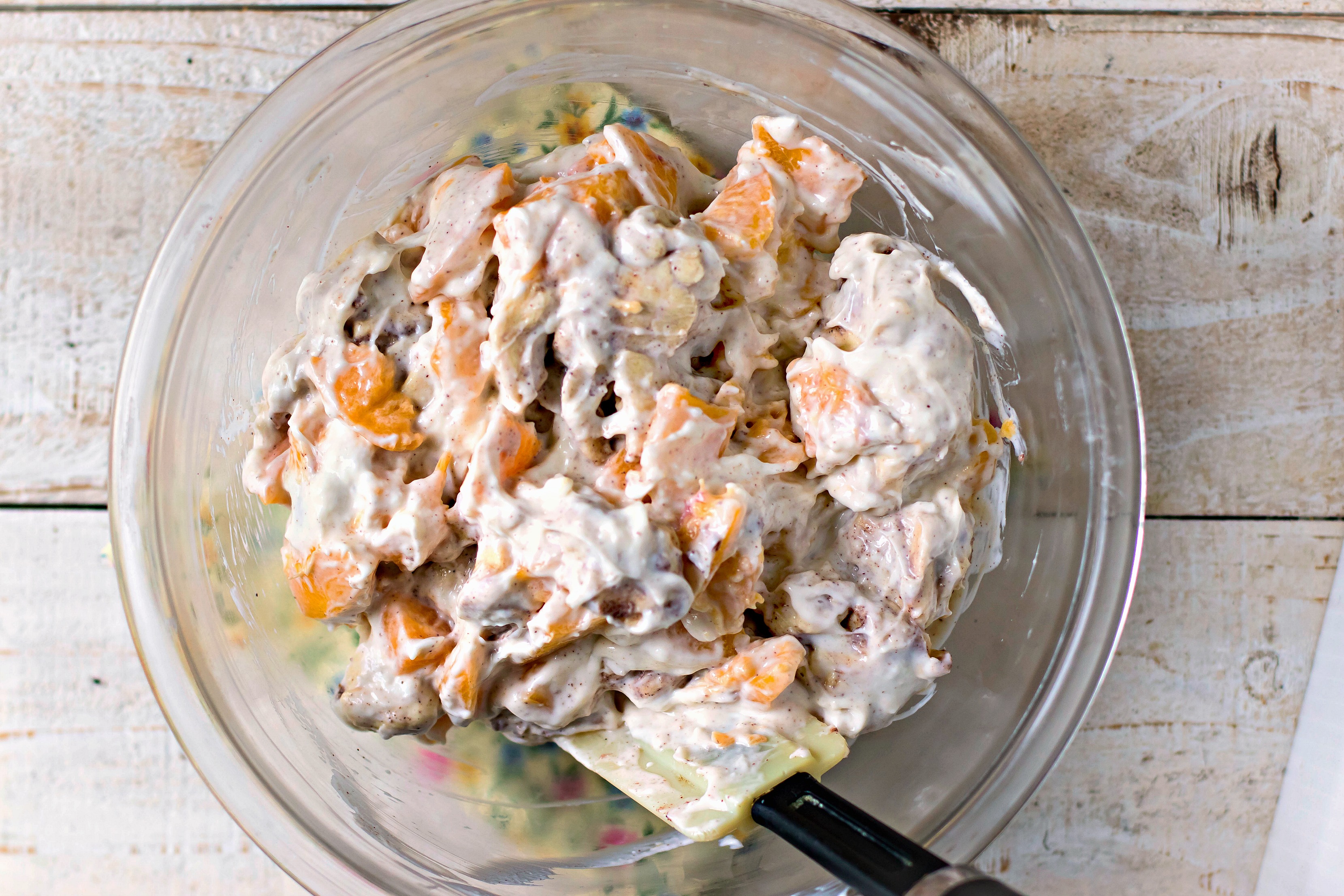 When all your rolls are cut, place the pieces into the bowl of cream cheese and peaches. Stir to coat them as evenly as possible. 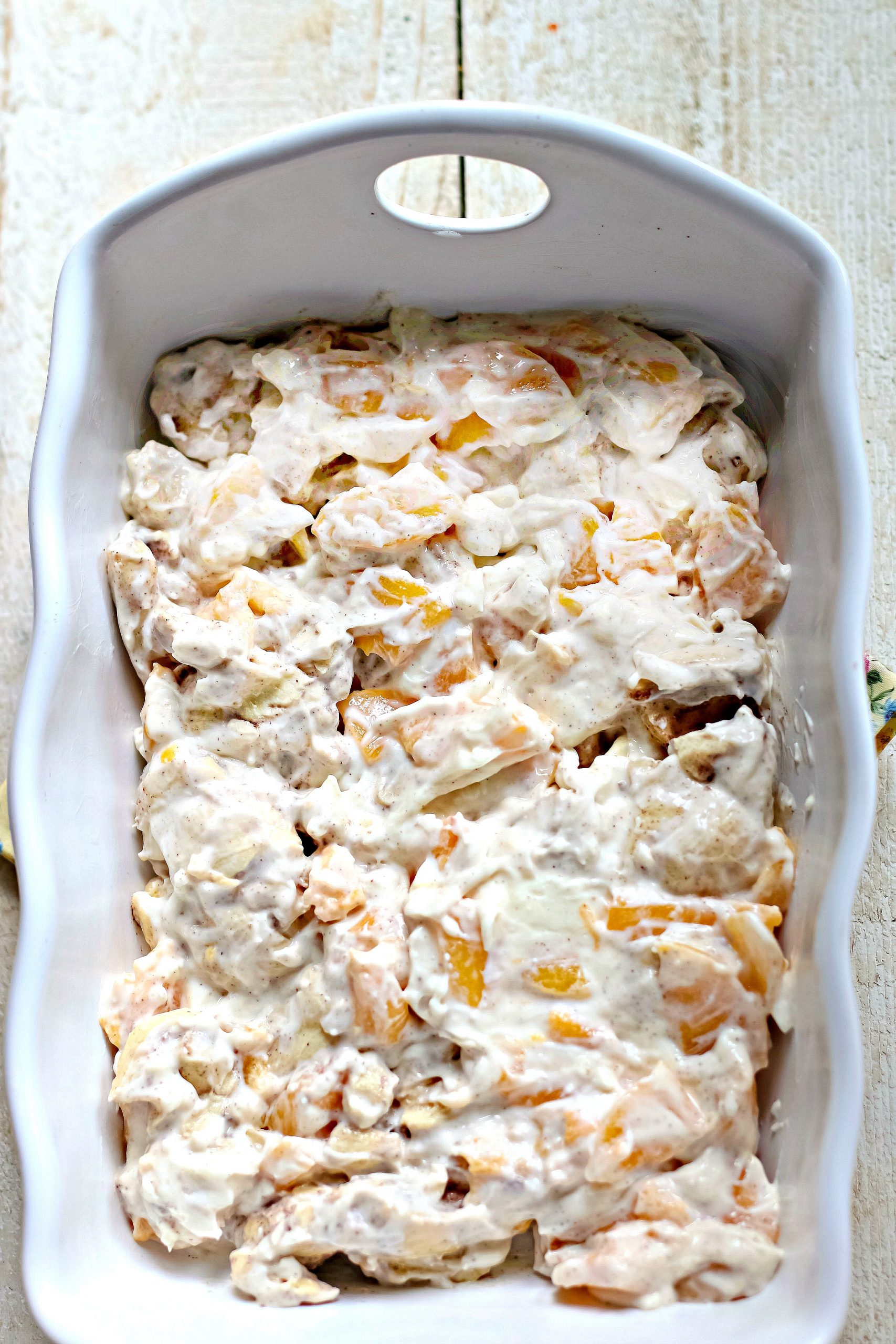 Place the mixture into a buttered 13×9 inch baking dish, spread it out as evenly as possible.  Bake in a preheated 350 degree oven for about 40 minutes or until the sides are bubbly and the top is golden.  After the casserole came out of the oven I sprinkled it with 2 Tablespoons of crushed pecans.  That’s totally optional though, my husband the pecan lover liked the addition.

I absolutely loved this. The peaches were wonderful nestled in cream cheese. The cinnamon rolls added just a touch of cinnamon flavor, it wasn’t overpowering at all. The ingredients worked very well together to make a wonderful flavor and texture.

This casserole is easy enough to make for weekend breakfasts or hey, making it as a dessert works too. Think about taking it to a potluck or treat your co workers to an amazing breakfast treat. This one’s a keeper, it’s just too good not to, Peach Cream Cheese Cinnamon Roll Breakfast Casserole, ENJOY!