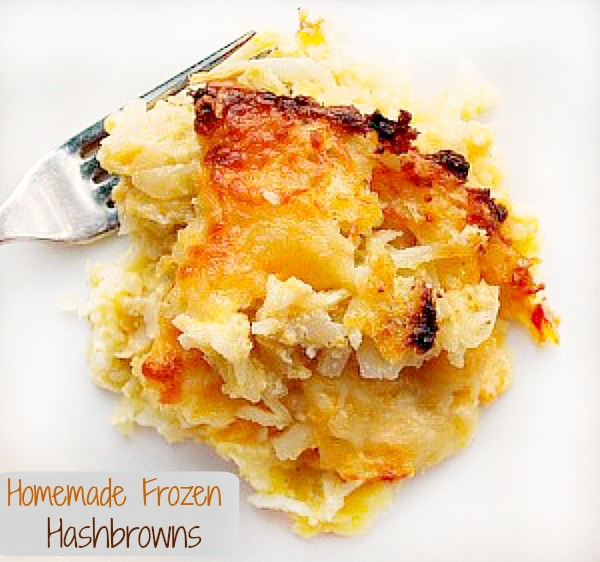 You’re not going to believe how easy it is to make Homemade Frozen Hashbrowns.  My search to find a way to make them started when I kept seeing all these wonderful hash brown casseroles on Pinterest and forgetting to get them at the store.  The nearest Kroger is 12 miles away.  It’s not economical gas wise ,for us to run to the store on a whim.  PLUS, my husband planted 2 very long rows of potatoes in the garden, we have no root cellar.  How am I going to make good use of all those Yukon Gold and Red Pontiac potatoes?  My Irish makes me a little bullheaded, if there was a way, I was going to find it.  My search lead me to a blog called AMORRIS.  She had “how to pictures” on making and freezing hash browns that she got from her friend Gayle. I did it, it works and now I’m sharing it with you.

First, select potatoes that are relatively the same size.  You don’t have to peel them if you like hash browns with the skins on. 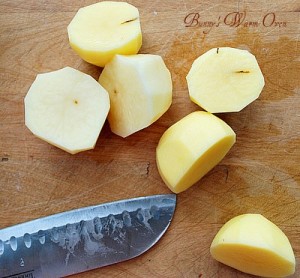 If the potatoes are large, cut them in half. These weren’t large but I cut a few just for the sake of showing you. 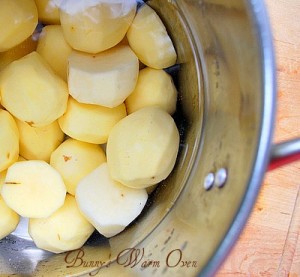 Put the potatoes in a pot of cold water.  Put them on the stove, boil for ten minutes or just until tender. 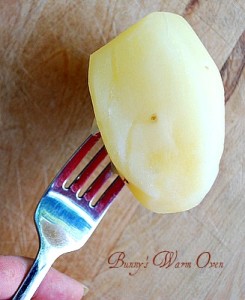 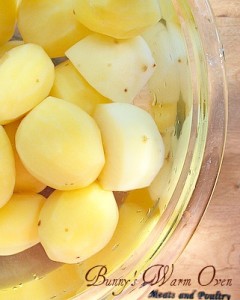 After the potatoes have boiled , drain them in the sink and cover them with cold water to cool down, then put them in a bowl of cold water and refrigerate them overnight. 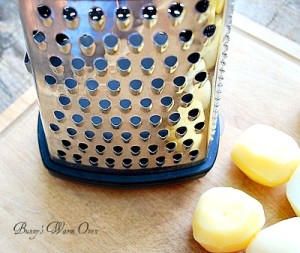 The next day, drain the potatoes and pat them dry, it’s time to grate them.  If you have a food processor with a grating blade this will be easy for you.  I used my hand grater on the largest grates it had. 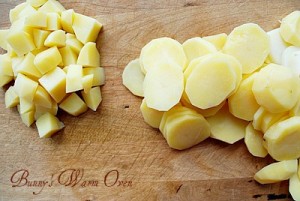 The nice thing about this technique is you’re not limited to just grating the potatoes, you can dice them or slice them as well.  You don’t have to flash freeze the potatoes because they are dry, but you could if you wanted to.

I would suggest freezing them by the amounts you would use them to make casseroles or other recipes with.  Bag them up and put them in the freezer. 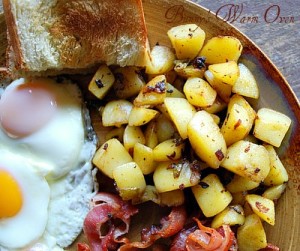 I took my diced potatoes out of the freezer this morning, thawed them in the microwave and made my husband  fried potatoes for breakfast. I haven’t used the sliced potatoes in a recipe yet ,but I’m thinking along them lines of Au Gratin or Scalloped potatoes when I do. And I’ll let you know how that goes.
This was so easy and economical to do!  Who doesn’t need to save a little money at the grocery store by making something prepackaged homemade!  Enjoy!
As promised, here’s a delicious recipe for a Hash Brown Casserole that I used the frozen hash browns in.  I halved the recipe for Paul and I.  I also didn’t have corn flakes so I put grated Parmesan cheese on top.