Fresh Corn and Bacon Side Dish isn’t just another corn side dish, this is a treat!

This fried corn is cooked with bacon and chives until golden brown and caramelized. The ultimate easy summer side dish that pairs well with grilled meats, fish and hamburgers. A Southern classic that never goes out of style!

You can never go wrong when you serve corn as a side dish; some of my favorites include black bean corn salad, slow cooker creamed corn, and this simple yet flavorful fried corn. 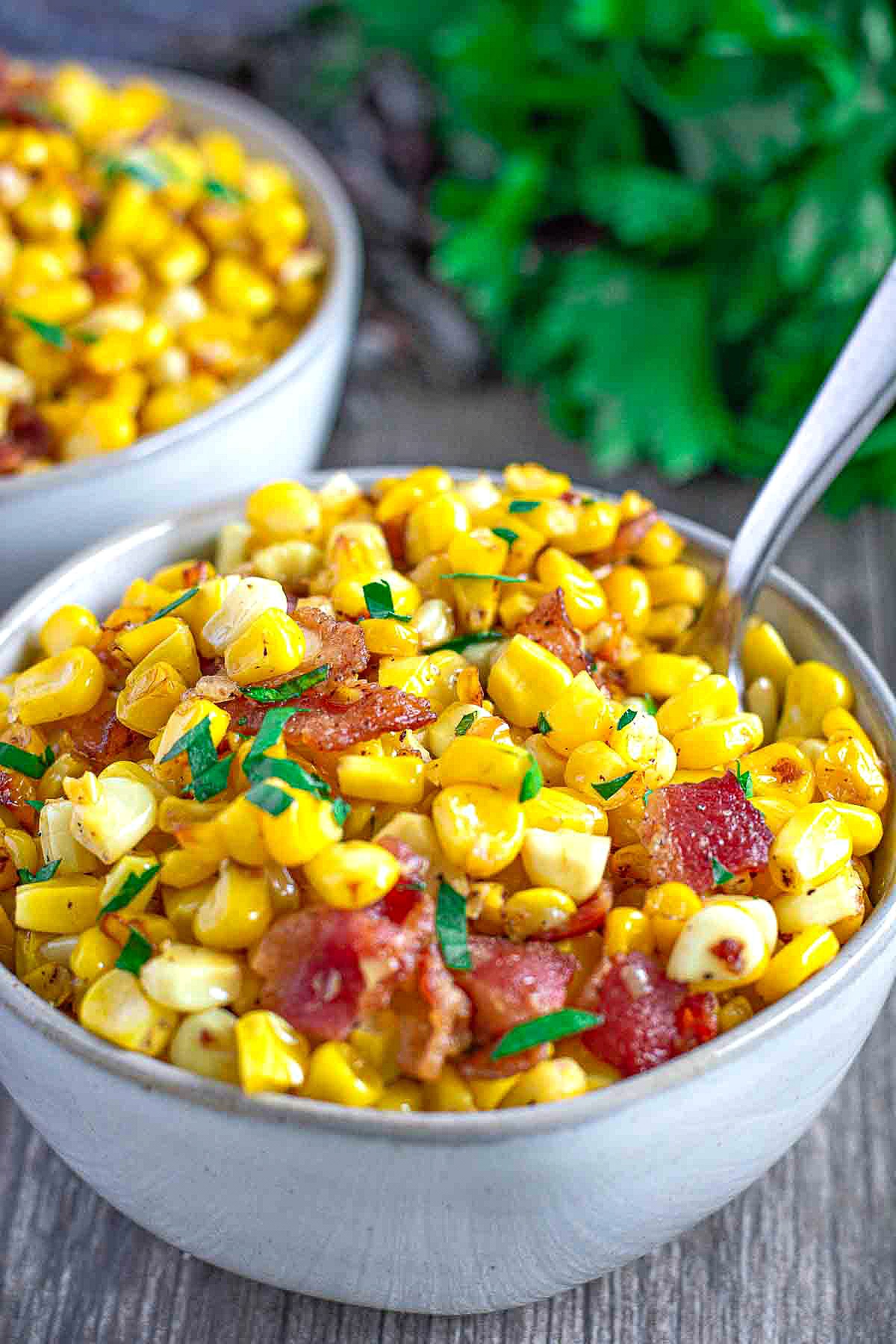 When my husband tasted this corn side dish he said it was the best corn recipe he ever had. Isn’t it amazing that something so simple to make can be absolutely amazing? Maybe it’s just the simplicity of the recipe, the fact that you’re taste buds love the fresh corn taste. I think when Summer comes around and fresh vegetables are in season we are eager for their flavors. This easy corn side dish recipe gives you just that.

Can I Make This Corn and Bacon Recipe With Canned Corn or Frozen Thawed Corn?

Obviously you can, but with any canned or frozen thawed vegetables there will be a slight difference in taste. Nothing tastes as good as fresh picked vegetables and corn on the cob. If you’d like to make this recipe using canned or thawed frozen corn for… let’s say a Winter holiday side dish remember this:

The one thing you’re going to miss when using canned or frozen corn is the corn milk from the fresh cobs. When you cut fresh corn from the cob you get corn milk. I don’t know what it’s actually called , I’m sure there’s a technical name for it, but I’ve always called it corn milk because it’s white. After I’m done cutting the corn from the cob on a plate, I add the corn milk that collects on the plate ( there’s not a lot) from cutting the kernels off the cob and add it to the pan along with the kernels. The corn milk is sweet and adds a little more flavor to the corn. 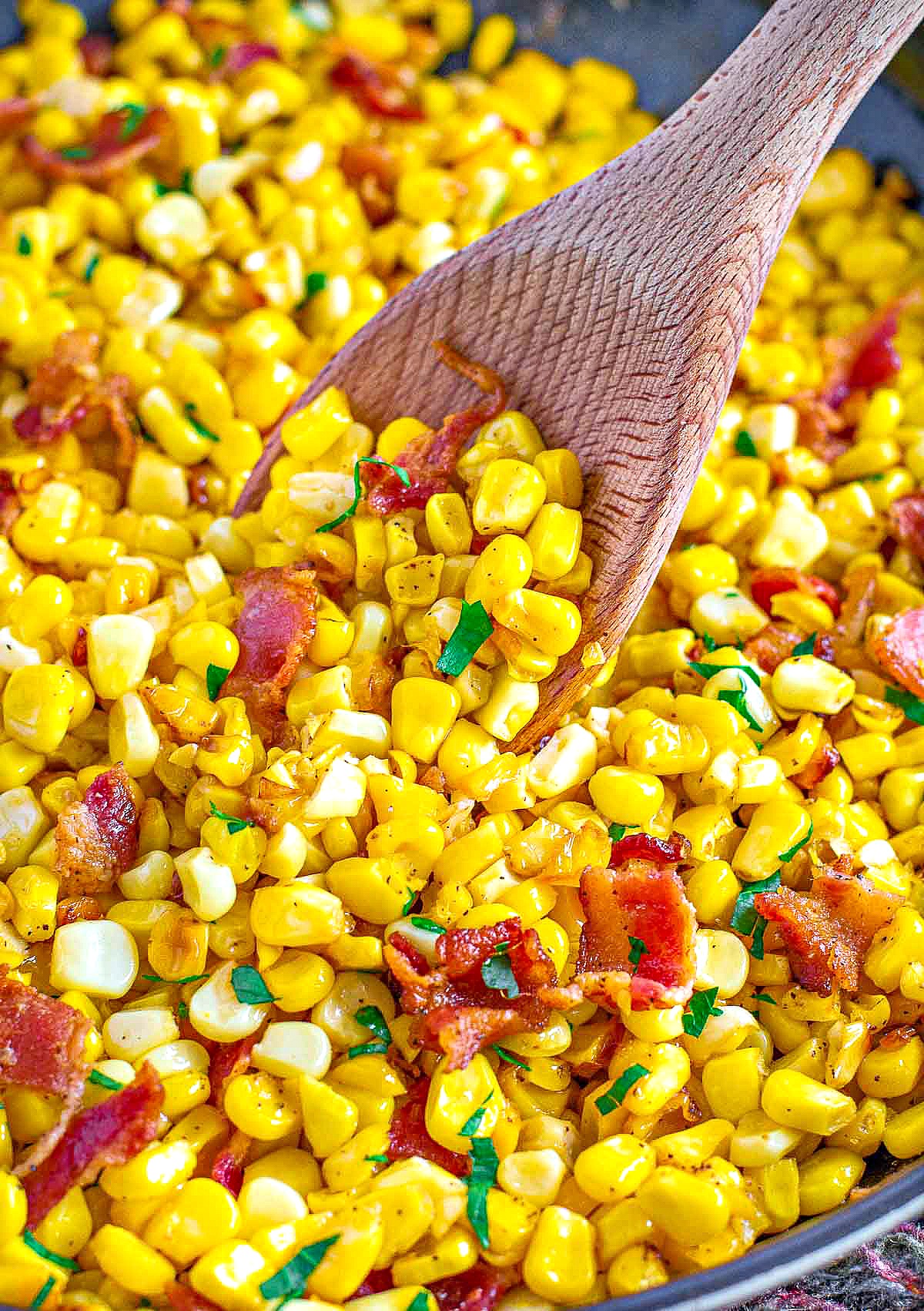 How Do I Store Fresh Corn On The Cob?

After you’ve either purchased your fresh corn on the cob from the market or picked it from your own garden it will need to be stored in the refrigerator or frozen to use when you’re ready to eat it. According to WikiHow  you should store your fresh corn on the cob with the husks on, the husks help keep the corn moist and fresh. Place the cobs in a large zip lock plastic bag and place them in the refrigerator, they’ll keep in the fridge for up to 5 days without drying out.

How To Freeze Corn On The Cob?

This article from LeafTV shows you how to freeze your fresh from the garden corn on the cob.

Let’s gather the ingredients for this delicious fresh corn side dish recipe and make it together. 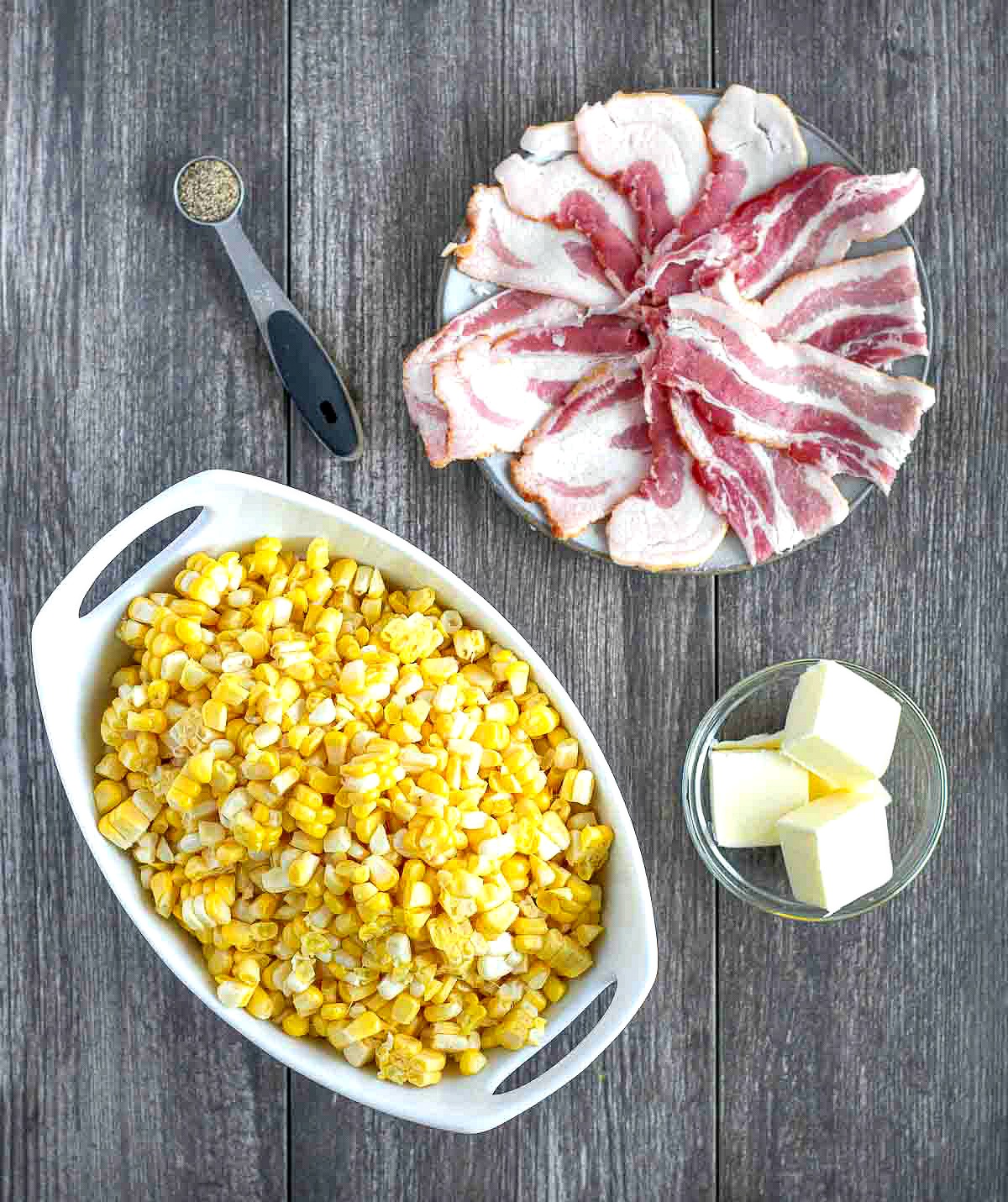 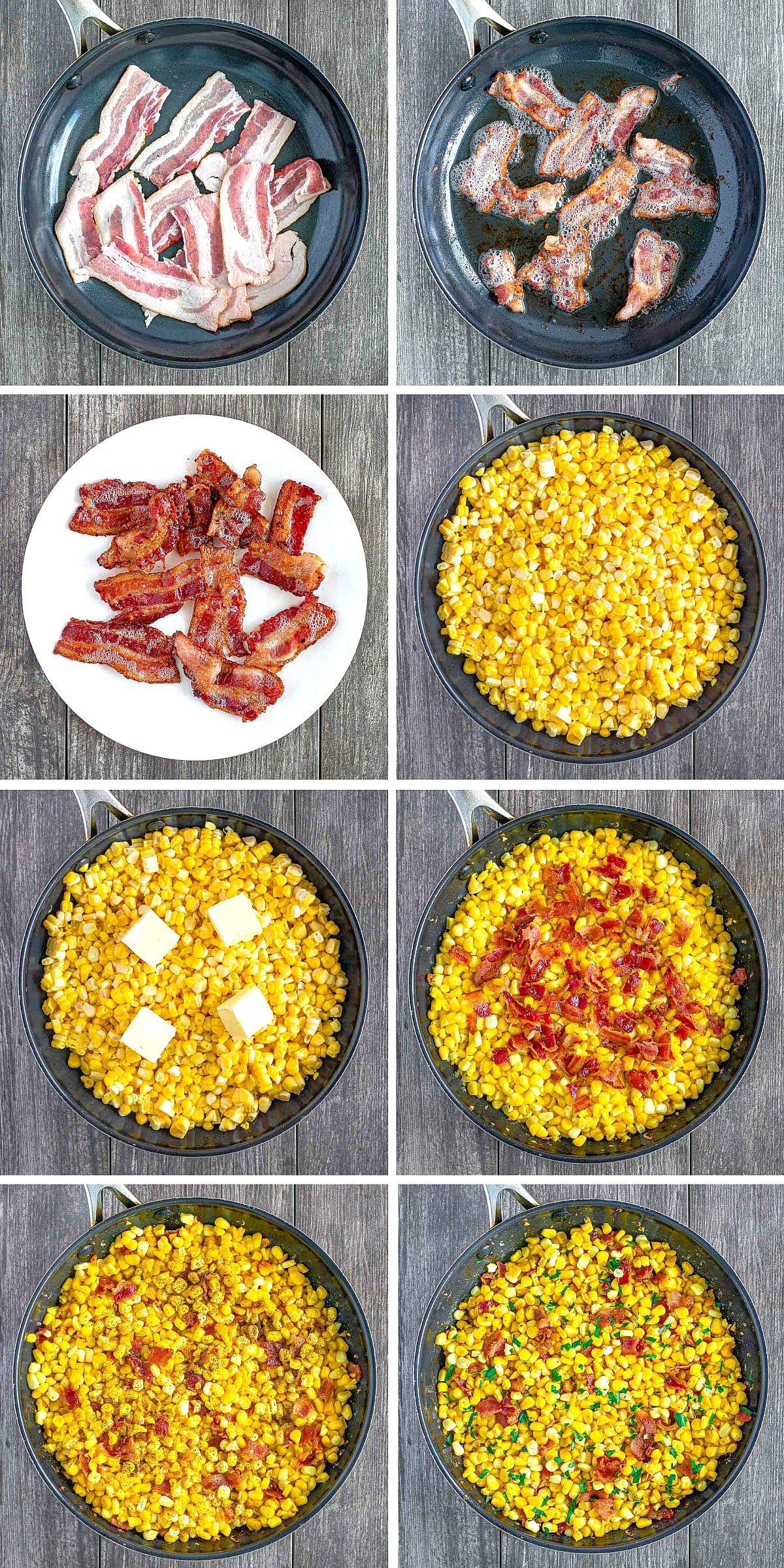 Place 4 slices of thick slab bacon in a frying pan, fry the bacon until cooked. Remove the bacon from the frying pan to paper towels to drain and cool. After the bacon has cooled, cut the bacon into one inch pieces.

Place each corn cob on a plate, using a knife (or a gadget that removes the kernels from the corn) slice the corn kernels from the cob. Place the corn, plus any corn milk from slicing the kernels off the cob that may be one the plate, in a medium size saucepan. Add 1/4 cup butter plus the cooked bacon to the fresh corn in the pan. Cook the ingredients for about 15 minutes or until the corn is hot. Season with pepper and serve immediately. 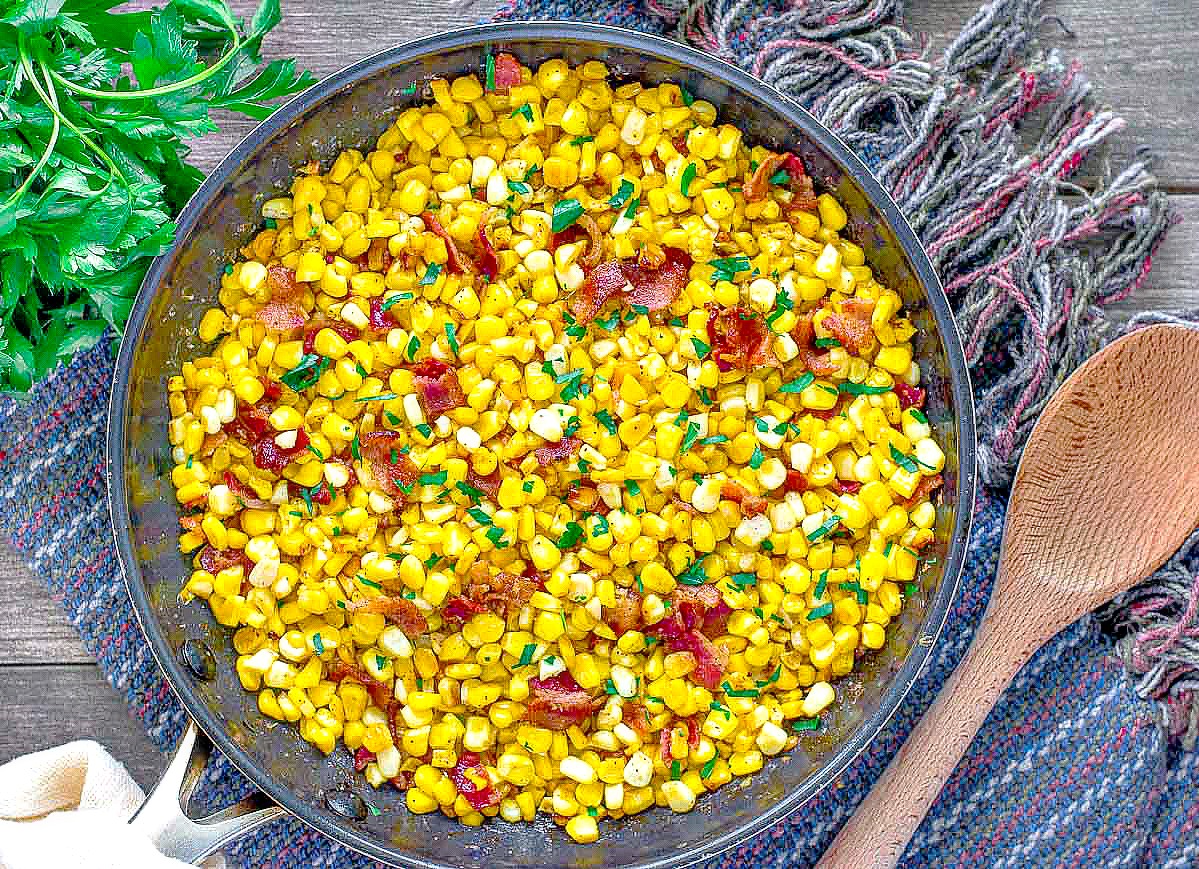 This delicious corn and bacon side dish is “What’s For Dinner”!? and you’re going to love it!